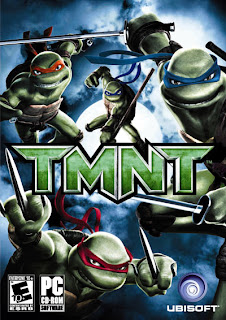 Short Description
For TMNT video game, I only played its Nintendo Version. I never touched for the major version, such as PlayStation, PlayStation II, Xbox, Wii etc. The main characters of this game are Leonardo, Raphael, Donatello, dan Michelangelo, and the main enemy is always Shredder. Maybe by playing this game you won't regret especally for you who fans of TMNT. Then the next is from Mr. Wiki :
The gameplay in TMNT contains many acrobatic segments in the vein of another Ubisoft game series, Prince of Persia. The game features sixteen levels, sixteen story and sixteen unlockable challenge levels. The game also features five playable characters, each with their own unique fighting style and abilities. The game encourages cooperative gameplay, as the player will have to use each turtles special abilities to navigate through their environment. Ubisoft has stated the focus within the game is "on the four turtle brothers finding out their differences and getting through family problems." They also have said that TMNT features "mostly Single-Player campaigns for each brother."

Leonardo, training in the woods, is then given the mission to find a mystic amulet by Master Splinter's orders. After he finds the amulet, it is revealed that Splinter was telling the story of how they stopped the four Stone Generals, and asks Donatello and Michelangelo to continue it. Once, Raph infiltrated Max Winters' tower (as Nightwatcher), and eavesdropped on a conversation with Winters and Karai.
System Requirements
Pentium 4 1,5GHz
RAM : 512 MB
VGA : 64 MB
Pixel Shader 1.1
HDD Space : 1,6 GB
OS : Windows XP/Vista/7 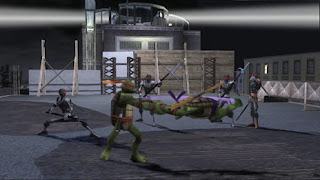 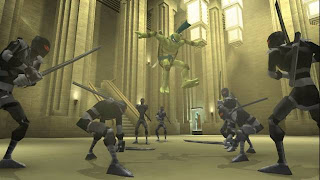